Securing the Future of Your Download-Only Software

Let’s face it, software developers are moving more towards digital distribution rather than physical boxed products. There’s less bulk, it’s cheaper to distribute, and it arrives in the customer’s hands almost as fast as it takes to stream a movie off Netflix. There’s a major pitfall to this approach however. What happens when that download is no longer available? Some companies like Adobe no longer offer physical discs for their software. While it may sound tempting to spend $15 for an optional “backup copy” you may be better off saving your money (and your disappointment) because what arrives is likely to be a CD-R/DVD-R worth only a few cents originally. Consider the following scenario; your company purchases an expensive proprietary download-only software package that will need to be archived for years after purchase if not indefinitely.

Professionally produced CD’s and DVD’s have been the preferred media for software distribution for many years. This is mainly because the information on this media is stored physically by stamping divots into the reflective layer. A laser then translates the divots into data by measuring the angle of the beam as it bounces off the surface. So which storage media would you choose when that isn’t available? Traditional hard drives are susceptible to crashing and data loss with age because the information is stored magnetically (if you’ve ever tried to read an old floppy disk, you’d run into the same problem). Solid state drives (SSD’s) and flash drives are another option, but these devices don’t typically include write-once flash chips so they have the potential to be accidentally deleted or corrupted. Recordable optical media such as CD-R, DVD-R, and BD-R use a thin transparent organic dye (typically Cyanine, Metalized Azo, or PhthaloCyanine) layered between a polycarbonate substrate and a light reflective layer (usually gold or silver). As the disc is written, the high intensity of the laser scorches the dye turning it opaque to mimic the effect on the laser beam that a physically stamped disc would provide. Unfortunately, any dye is susceptible to fading, and although PhthaloCyanine discs have been shown to be more resistant to fading its practical life expectancy is estimated to be between 2 – 5 years. If you’re thinking the options aren’t looking too promising, you’d be right… but don’t discount optical media just yet!

If you’ve purchased a DVD or Blu-ray writer from LG, Lite-On, or Samsung lately, you might come across a strange new logo on the front designating the drive as “M-Disc” compatible. Stranger still, if you took a look at one of these M-Discs you’d find them similar to a dark tinted transparent glass. So what is this new optical media? To put it simply, they are an archivist’s dream: a consumer recordable optical media format that makes permanent physical changes to the disc while retaining compatibility with existing DVD-ROM and BD-ROM drives. Unlike professionally stamped and mastered DVD’s, M-Discs do not have a reflective layer making them entirely resistant to disc rot (oxidation or damage to the reflective layer causing the data to be unreadable). The organic dye found on other recordable discs has been replaced with a synthetic “glassy carbon” with properties similar to stone, and there is a much stronger adhesive between the layers making them less likely to split in high temperatures, humidity or light (granting them a Department of Defense certification for data retention). Conventional DVD and Blu-ray writers are unable to record data to the disc, this is because the synthetic layer is etched rather than “burned” but most if not all recording software is compatible with the format. 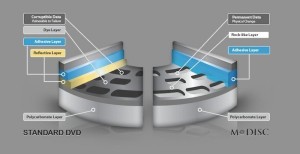 The initial investment required to record to M-Disc media is not substantial; a compatible drive can be purchased for roughly $80 with Blu-ray M-Disc drives costing only slightly more. This is not a recommended format for temporary storage, or any sensitive information which may need to be destroyed (for example DVD-R media can be rendered unreadable by a few seconds in a microwave to split the reflective layer, to do the same with an M-Disc you’d at least need a heavy duty shredder). For archival storage of software, this is an ideal choice given the DoD certification and provided the disc is stored correctly to prevent scratches. A pack of ten 4.7 GB M-Discs will cost about $29.99 ($1.57 per Gigabyte), while the 25 GB Blu-rays are $16 for 3 discs with jewel cases ($4.67 per Gigabyte). In my personal tests, I didn’t notice any significant impact to the speed of writing to an M-Disc DVD using my M-Disc certified LG DVD/BD Writer compared to a normal DVD-R and all of my test drives were able to read the disc as if it were a normal DVD. Overall I would recommend M-Discs as a viable archival storage solution, and given that the technology is fairly new (developed in 2009-2010) it’s likely there will be a price drop eventually.