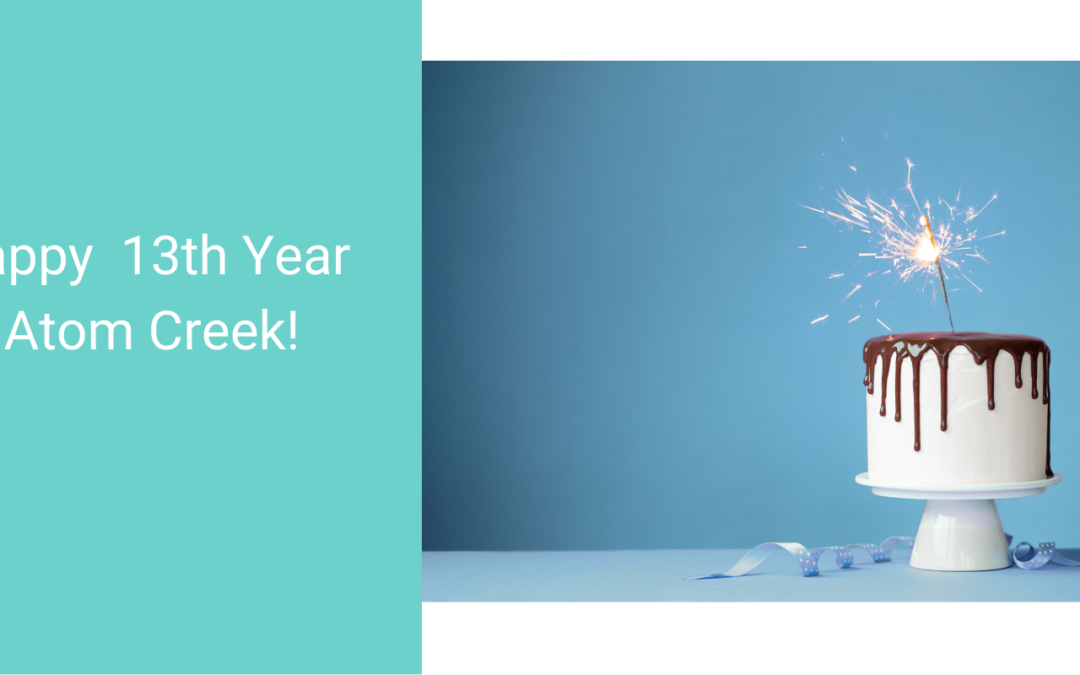 As we fast approach the end of February & the beginning of March, somewhere in the magical hours passing between Sunday & Monday Atom Creek will turn 13!!!

With nothing more than a small 8×10 room with barely enough space for their 2 desks the men created a whole lot of something from not much; like Atom’s do! I am sure the men listened to Low by Flo Rida over and over again to keep themselves hyped or maybe even they tried to Forget Sarah Marshall, but they put their heads down, used a rolodex & got it done.

As time passed, they grew out of their tiny space added employees, cultivated their knowledge base & hold steady in an everchanging & growing arena that is “Information Technology”.

Here are 13 Tidd-Bits about Atom Creek:

4. Due to the Leap Year inception date on paper Atom Creek is only 4.

5. Atom Creek was named after a combination of various things in Cofounder Shayne Sivley’s past; Waxahachie, TX a small town that Shayne considers as his original hometown. The name Waxahachie (pronounced wawk sah hatch ee) is derived from the Native American word meaning “Buffalo Creek.” In the 80’s Waxahachie was chosen as the site for the Super Conducting Super Collider and was dubbed the “Atom Smasher”. It would have been the world’s largest particle accelerator, even to this day, had it been completed.

7. The poker chips for the 7-year anniversary have been bet with in Vegas followed by a not nice invitation to immediately leave the casino floor.

8. Did you know Atom Creek offers FusionsDP which is our Data Protection Service- call for more information!

11. Our customers love us so much that they send people to work for us! Just ask Scott Carson how being in a band lead to his tenured career with Atom Creek.

12. On the 12th Anniversary Shayne & Dave were “patched” into their own company, because who doesn’t love SOA? What else would you do to commemorate 12 awesome years?

Thank you for a wonderful 13 years

Without the steadfast dedication of our employees, faith from our clients & amazing partnerships with our vendors, Atom Creek wouldn’t be the success we see ourselves today.